In part 1 of this series, we discussed how gut bacteria, or the microbiota, affect your health, from metabolism to mood, and contribute to a number of chronic diseases. In this article, we offer some strategies for maintaining a healthy microbiota, from reputable sources, supported by science.

Eat a Diverse Range of Foods

Generally speaking, a diverse microbiota is considered to be healthier. Each of the hundreds of species of bacteria in your gut requires different nutrients for growth – the more species of bacteria, the greater number of health benefits they may be able to contribute to.

A diet of different food types contributes to a diverse microbiota. Unfortunately, the Western diet is not very varied, and is rich in fat and sugar. According to a report from Biodiversity International, it is estimated that 75% of the world's food comes from only 12 plant and 5 animal species. A few studies have shown that gut microbiota diversity is much greater in people from rural regions of Africa and South America. So be adventurous; consider adding some new, different foods from the following categories to your diet.

Fruits, vegetables, beans, legumes, and whole grains are the best sources of nutrients for a healthy microbiota. They are high in fiber, which can't be digested by your body, but can be digested by certain bacteria in your gut, stimulating their growth.

Some high-fiber foods that are particularly good for your gut bacteria include:

Apples, artichokes, blueberries, almonds, and pistachios have all been shown to increase Bifidobacteria, beneficial bacteria that can help prevent intestinal inflammation in humans.

Whole grains contain lots of fiber and non-digestible carbs, such as beta-glucan. Whole grains can promote the growth of Bifidobacteria, lactobacilli and Bacteroidetes in humans.

The process of fermenting usually involves bacteria or yeasts converting the sugars in food to organic acids or alcohol. Examples of fermented foods include:

People who eat a lot of yogurt appear to have more lactobacilli in their intestines and fewer Enterobacteriaceae, a bacteria associated with inflammation and a number of chronic diseases. The best yogurt is natural and plain because many yogurts, especially flavored ones, are high in sugar.

Polyphenols are plant compounds that have many health benefits, including reducing blood pressure, inflammation, cholesterol levels, and oxidative stress. Polyphenols can't always be digested by human cells. Given that they aren't absorbed efficiently, most make their way to the colon, where they can be digested by gut bacteria.

Good sources of polyphenols include:

Polyphenols from cocoa can increase the quantity of Bifidobacteria and lactobacilli in humans, as well as reduce the quantity of Clostridia. An additional benefit is that these changes in the microbiota are associated with lower levels of triglycerides and C-reactive protein, a marker of inflammation. The polyphenols in red wine have similar effects. 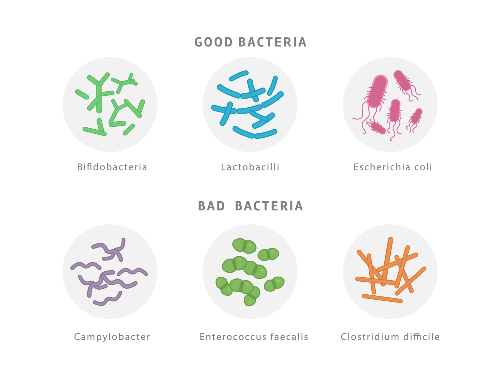 What about things we should avoid in order to protect our gut health?

Early research suggests that chronic alcohol intake is associated with changes in the bacterial microbiome, which may play a role in alcohol-induced tissue injury and liver disease. In general, alcohol is not great for your health, so it is recommended to avoid overindulging.

There is a current trend towards high fat/low carb diets; however, early research suggests that a diet rich in saturated and trans fat may not be healthy for the gut. Studies in both animals and humans have shown that a diet rich in saturated fat may increase bad gut bacteria and decrease good bacteria. In contrast, consuming unsaturated fats such as avocado, olive oil, and nuts may help your gut.

Research has linked animal products, especially red meat, to unfavorable impacts on the microbiome. Studies suggest that eating red meat may reduce the beneficial short-chain fatty acids that help feed gut bacteria. Eating red meat may also promote the growth of bad bacteria, and potentially increase the risk of irritable bowel disease. Certainly everything can be eaten in moderation, so you don't need to stop eating meat entirely, but we can all likely benefit from eating less of it.

While research in humans is still lacking, early rodent research found an association between common food additives and shifts in the microbiome. It also found evidence of intestinal inflammation and an increased risk of irritable bowel disease. What does this mean for humans? At this point, we’re not sure, but considering most food additives are present in high-fat, low-fiber, and heavily processed foods, which we already know are unhealthy, this is simply one more reason to avoid them.

So as it turns out, protecting your gut health is simple nutrition 101: Eat a varied diet high in fiber-rich fruits, veggies, legumes, and whole grains; reduce refined, processed foods; and go easy on the booze.